There was prolonged applause for Adel Sedra from the Theatre of the Arts audience as he finished yesterday's noon-hour lecture on "Universities from the Bottom Up: Personal Reflections of a Lifer".

Sedra (right), UW's dean of engineering since 2003, was the speaker for the 14th annual Friends of the Library Lecture, mixing reflections about the working of universities with recollections of his life and career at the University of Cairo, the University of Toronto and now UW.

"I have spent 47 of my 62 years on earth hanging around universities," Sedra said. "If I had my life to live again, I would still pursue an academic career -- there is no better choice."

Among the points he stressed was the ideal of what he calls "the fully functioning faculty member", one who teaches at both undergraduate and graduate levels, does research, supervises future scholars, and serves both the university and the profession. Something is wrong when a professor's time is all devoted to research, he said: "I don't like the term 'teaching relief'. It makes it sound as though there is great pain."

Sedra also told the audience that in an ideal world he'd like to see engineering become a second-entry academic program, with students taking at least a couple of years in arts and science before entering professional study. And he stressed the importance of planning in the academic environment, referring to two campus-wide planning exercises he led during his time as provost of U of T, as well as the current "Vision 2010" project in UW's engineering faculty.

He drew laughter a number of times, mostly with self-deprecating comments, including the observation that having an engineer give the Friends of the Library Lecture is striking because "engineers are not known to be great readers!" (In answer to a question after the body of his talk, he spoke enthusiastically about the role of librarians in helping students and researchers find their way through the information jungle.)

Sedra was introduced by Michael Higgins, president of St. Jerome's University, who has been a central figure in the Friends of the Library celebration since it began in 1993. Yesterday's event included a brief farewell to Higgins on behalf of the library and its allies, as he is leaving Waterloo June 30 to become president of St. Thomas University in New Brunswick.

Each year's Friends event includes a tribute to members of the UW community who have written books or produced other creative works in the previous year. Some 30 people were recognized yesterday, with their books on display in the theatre lobby. Among the authors: Norman Ball of systems design engineering and the Society, Technology and Values program (The Canadian Niagara Power Company Story); Alan Cairns of the political science department (First Nations and the Canadian State); and Julia Williams of Renison College (Learning English for Academic Purposes).

For the second year, nominations are being invited for an award honouring a kind of achievement by faculty members that often doesn't get recognized: "excellence in graduate student supervision".

Nominations are due by June 16 for the annual awards. The program was introduced a year ago, and four winners were named in the fall: Richard Hughson (kinesiology), Arokia Nathan (electrical and computer engineering), Frank Tompa (computer science), and Mark Zanna (psychology). Candidates who were nominated last year but did not receive the award will be carried forward into the nominees' pool for this year, the graduate studies office says.

The awards are sponsored by the grad studies office and the Graduate Student Association "to recognize exemplary faculty members", a maximum of three each year. "Recipients will be honored with $1,000 and a plaque. This honor will be conferred once."

Nominations have to come from current or former graduate students, "supported by one or more senior academic colleagues who are familiar with the nominee's supervisory record", such as a department chair or associate dean. "A nomination . . . may also be supported by other graduate students who have had the opportunity to receive guidance or informal mentoring from the nominee."

Factors to be considered include such things as "effective guidance and planning of graduate research for his/her students . . . established mechanism for ongoing interaction with graduate students . . . timely reading and provision of feedback on students' work . . . maintaining his/her role as an advisor while instilling independence in students . . . fostering and facilitating students' skills for problem solving, critical thinking, self-directed learning and effective communicating . . . promoting dissemination and presentation of students' research results".

In addition, there are the skills a supervisor shows "as a humanist/mentor", such as "provision of caring atmosphere to the students . . . willingness to provide guidance which may not be related to academic matters or to a student's career goals".

The dean of graduate studies chairs the award committee, and winners "will be recognized at an annual Graduate Studies Award Reception". A nomination form is available online.

"The Notebook Project", a multimedia interactive installation by painter Isabella Stefanescu, UW electrical engineering professor Rob Gorbet, composer Nick Storring and video and image artist Nathan Saliwonchyck, was more than one year in the making, and is now on view at the Kitchener Waterloo Art Gallery until June 25. 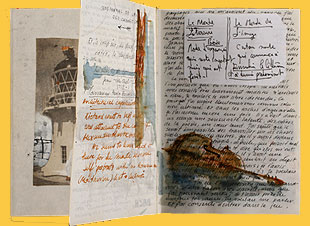 The installation is based on a small 4-by-6-inch notebook Isabella Stefanescu kept from 1992 to 1998 (right). "The palm-sized pages of writing and mixed media drawings are projected as wall-size images," she explains, "and the viewer can explore the notebook using an interface designed by artist and engineer Rob Gorbet. The viewer can turn the projected pages of the notebook by placing stones on a scale. The pages turn, the way they would in a book, thanks to the animation by video artist Nathan Saliwonchyck. Kitchener-based composer Nick Storring designed the sound and the electro-acoustic music to work in tandem with the animated turning of the projected notebook pages."

The genesis for "The Notebook Project", Stefanescu says, came in her studio during a discussion with KWAG curator Allan MacKay regarding the content and significance of notebooks to the artist's practice. "From these initial musings, a collaborative project was born. . . . The Notebook Project is part of the KWAG Singularly Significant Series, which showcases concise projects by high profile artists and illustrates significant historical and contemporary artistic trends."

Stefanescu, though she is a UW graduate in mathematics, also studied fine arts and now works in Kitchener at Globe Studios. She is one of the founders of CAFKA (Contemporary Art Forum Kitchener and Area).

Gorbet teaches electrical engineering and, with fine arts professor and sculptor Bruce Taylor, pioneered an Art and Technology course. Gorbet's installation "P2P" was first shown in 2002 at CAFKA. Saliwonchyck, a UW graduate with a BA in Russian, works as a video and multi-media consultant for the department of fine arts at the University of Guelph. Storring is a graduate of the Wilfrid Laurier University faculty of music; recently he has worked with MT Space composing and directing the music for the play "Seasons of Emigration to the West."