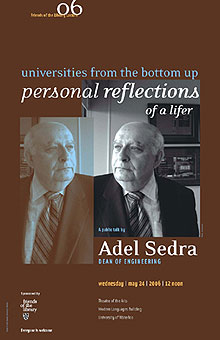 It should be a big day for the UW library, with a reception this morning to celebrate a major gift from 3M Canada, followed by the annual Friends of the Library lecture and "authors' event" at noon.

The 10 a.m. reception, in the Davis Centre lounge, recognizes a gift valued at more than $1 million. The company is providing the "One-Tag RFID" inventory and security system that's now being installed in the Davis Centre and Dana Porter libraries. The UW Library will be the first academic library in Canada to showcase this type of innovative radio frequency identification technology from 3M.

"This state-of-the-art technology from 3M will enhance UW's image as a leader in technology and innovation, while improving the overall efficiency of how our Library's collection is circulated," says university librarian Mark Haslett. He adds: "The system will also resolve a long-time cause of frustration for our community. Students, faculty, and guests using the Davis and Porter libraries will no longer need to have their backpacks checked for library materials by the attendant stationed near the building's exit."

RFID (radio frequency identification) technology is a relatively new concept for the management of library collections and security. What is unique about the security system from 3M is that it involves fastening a single RFID tag to library resources. This chip contains all of the information necessary to locate and identify an item such as a book, ensure security, and make the check-out process more efficient for both library users and staff. The new RFID system should be in place at Davis for the beginning of the 2006 fall term and at Dana Porter by September 2007. 3M security systems are already installed in the University Map Library and the Musagetes Architecture Library.

For more than a century, a news release explains, 3M has been an international leader in electronics, telecommunications, health care, and a considerable number of other markets. "3M Canada and the University of Waterloo have enjoyed a long and productive business relationship for over 25 years. 3M has been an active employer of UW co-op students, plus employs over 50 UW graduates at their North American locations. In addition to matching gifts, the company established the 3M Canada Inc. bursaries students enrolled in engineering, business, science, and computer science programs at UW."

After the morning celebrations comes the 14th annual Friends of the Library Authors Event showcasing the creative and innovative thinking of the UW community. The highlight of the event is a public lecture called "Universities from the Bottom Up: Reflections of a Lifer". The speaker, engineering dean Adel Sedra, promises to interweave personal observations and reflections facing the modern research university. He will discuss such topics as leadership in a university setting; strategic planning that works; the integrity of teaching as the hallmark of the research university; and university rankings and accountability.

For more than four decades, Sedra has been dedicated to advancing the worlds of academia and engineering. Dean since 2003, Sedra was previously at the University of Toronto, where he served as provost and as a professor of electrical engineering. His research has resulted in a number of awards and the publication of approximately 150 research papers and three textbooks. One of Sedra's texts, Microelectronic Circuits, has approximately 800,000 copies in print, is published in ten languages, and is used at hundreds of universities worldwide.

In addition to the lecture, 30 books by faculty, staff, students, and alumni from the UW community will be on display at today's noontime event in the Theatre of the Arts. Everyone is welcome.

Jim Bookbinder is the person to speak with if you're wondering how to get something from Point A to Point B in the best, most cost-effective way possible.

The professor of management sciences engineering and the director of WATMIMS Research Group (University of Waterloo Management of Integrated Manufacturing Systems) has done extensive research on ways of improving manufacturing and logistics operations in private-sector firms and elsewhere. He recently was the guest editor of Global Logistics, a special issue of Transportation Research, an international journal. The issue, which took Bookbinder three years to compile, includes papers about Europe and NAFTA (North American Free Trade Agreement), as well as articles on international logistics not confined to particular regions.

In his introduction to Global Logistics Bookbinder says the world has become a smaller place because of advancements in communication and transportation. "It is now often the case that components are produced in one country, then assembled into products in a second for distribution and sale in multiple other countries."

Transportation, Bookbinder acknowledges, sounds easier than it is. "The challenge is to find the best way of transporting goods at the best price. Transport by truck is fast, but its speed and accessibility come with disadvantages: air pollution and traffic congestion are associated with trucking. Faster doesn't always mean better," he says.

During the spring term Bookbinder will teach Logistics And Supply Chain Management, a graduate course he has taught under three different names since 1982. Although the faces of the students taking the course change each term, Bookbinder says one of the key messages of the course stays the same. "Good logistical processes will separate companies from their competitors."

Speaking of spokes, and other things

Ted Harms of the UW library staff is a fixture at the Bike Centre, on the lower level of the Student Life Centre, and sends "belated thanks to everybody that came out to the Bike Centre's auction on May 5." He says more than $1,000 was spent. More news from the world of wheelers: "Despite construction, the Bike Centre is still open; our hours are: Monday 1:30 to 7 p.m., Tuesday and Wednesday 3:30 to 7, and Thursday 5:30 to 7. Only our 'inside' door is operational. Please bring your bike down the elevator that's beside Brubaker's and walk it down the hall past the Apple II hairdressers and the CIBC. The Bike Centre can be reached at ext. 5174." And still more: "The Yellow Bike program is back! As before, the cost is $25 of which $20 is refunded at the end of the term. We've got new bikes thanks to money from the Endowment Fund and a deal from King St. Cycles and Norco. These are bikes that are available for short-term loan. For more info, please call the Turnkey Desk at ext. 4434."

The Ontario Centres of Excellence Inc. -- umbrella organization for some of the top research work in the province -- "is expanding its commercialization presence in the Waterloo region", a news release said last week, "and is moving its office to the newest hub for high tech in the area, the Accelerator Centre at the University of Waterloo's Research + Technology Park." Said OCE president Mark Romoff: "The Waterloo region has been recognized as a leading centre for innovation on a global scale -- a destination for cutting edge research with relevant commercialization outcomes. OCE is proud to have played an active role its growth and success for almost 20 years. Taking up residence as a founding tenant in the new Centre, with its state-of-the-art facilities and community of innovation focused tenants, will help us to be more effective in a market that we believe is critical to the economic future of the Province and Canada." The UW-sponsored centre, at 295 Hagey Boulevard on the north campus, is expected to encourage the growth of high-tech firms and act as a catalyst for the creation of products and services. "It will provide a fertile environment," said the release, "to commercialize the innovative work done in universities and colleges, hospitals and laboratories, and in private sector research facilities." OCE is a not-for-profit corporation that delivers the Ontario Centres of Excellence program, funded by the ministry of research and innovation, in communications and information technology, earth and environmental technologies, energy, materials and manufacturing, and photonics.

A senior executive of the department of cooperative education and career services retired at the end of April. She is Cathie Jenkins (right), a former teacher who started her UW career in 1984 in the office of development. In 1989 she made the move to CECS, originally as a coordinator for the mathematics and accounting programs, and in 1996 she became associate director (program services), a title later changed to "student services". "She thoroughly enjoyed her work with the Students Advising Co-op," says a colleague, adding a few other achievements during Jenkins's years in the job: "She organized a series of lunchtime information sessions, called Chew on This, for interviewing employers, and the first conference to be held in our new building. The Training and Development Committee, the Keystone Fund campaign and numerous other department and university committees benefited from her valuable advice over the years." She's also been active in community volunteer work, particularly with the Kitchener-Waterloo Symphony. And "peculiar to her desire to promote how great our co-op students are, Cathie requested that any funds donated for a retirement gift in her honour be instead directed towards a newly established Keystone Campaign priority, 'student recognition awards'. The money will go to support a cash award to recipients of the annual Co-op Student of the Year Award." With her retirement, Kerry Mahoney, who heads the career services section of CECS, is acting associate director of the department.

The Southwest Economic Assembly, sponsored by UW and two other universities and bringing together government and business leaders from southwestern Ontario, is under way today at a Stratford hotel. . . . Friday morning's seminar in the information systems and technology department will be a briefing by associate provost Alan George about departmental reorganization, and all staff will be attending, so the Computing Help and Information Place (CHIP) won't open until 10 a.m. . . . The Record reports this morning that Waterloo Regional Police have arrested a 40-year-old man and charged him with "a string of break-and-enters" at UW and Wilfrid Laurier University involving theft from vending machines. . . .