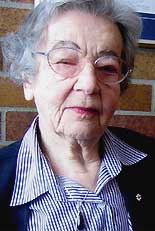 Thinking about the role of technology in society will be the topic of this year's Hagey Lecture tonight. Renowned scientist Ursula Franklin (left) will present the Hagey Lecture at 7:30 p.m. in UW's Humanities Theatre, Hagey Hall of the Humanities. (The building, like the lecture series, is named for UW's founding president, Joseph Gerald Hagey.)

There are still a number of tickets available, the Humanities box office reported yesterday. Admission is free -- phone 888-4908. The lectures are jointly sponsored by UW and the faculty association.

Franklin's lecture is titled "Thinking about Technology: Defining Technology as Practice." Acclaimed internationally for her pioneering work in the field of metallurgy -- the science of extracting metals from their ores and modifying the metals for use -- Franklin has also worked tirelessly to bring a humanitarian and feminist voice to the world of science and technology.

Tomorrow morning at 10:30, Franklin will give a student colloquium that addresses questions arising out of her lecture the night before. That event takes place in Davis Centre room 1302.

Hagey lecturers have distinguished themselves in some scholarly or creative field, and their work "cuts across traditional disciplines and national boundaries", according to the official description of the series. Previous lecturers have included Nobel Laureates in various disciplines, internationally renowned scholars, architects, peace activists, and well-known artists.

The first woman to be granted the title of "University Professor" at the University of Toronto, U of T's highest honour, Franklin continues to be actively involved in humanitarian, feminist and environmental activities, such as encouraging young women in science, working for peace and justice, along with disseminating her thoughts on the social and environmental impact of science and technology.

Among numerous honours and distinctions, Franklin has been awarded the Pearson Peace Medal and honorary doctorates from several Canadian universities. In 1992, she was made a Companion of the Order of Canada.

Franklin was born in Munich, Germany, in 1921 and began her career during the Second World War. While a young science student, she was imprisoned in a Nazi work camp because her mother was Jewish. She spent the rest of the war repairing bombed buildings. She received her PhD in experimental physics at the Technical University of Berlin in 1948, and emigrated to Canada the following year with a lifelong commitment to peace activism.

For the next 15 years, Franklin worked as a senior research scientist at the Ontario Research Foundation. In 1967, she joined the U of T's metallurgy and materials science department.

Weather forecasts showing the likely temperature, wind, pressure and precipitation every three hours for the next two days are being offered online -- free -- by UW's Waterloo Centre for Atmospheric Sciences.

"The WCAS is offering this as a free service to the community," says chemistry professor Jim Sloan (left), who heads the centre and whose research involves atmospheric chemistry and physics, including the spread of air pollution.

"The forecast is centred on the Waterloo area," Sloan notes, but data are shown for areas as far away as Alberta and Texas, depending which set of charts a user clicks. There's also a choice in the up-and-down dimension: since pilots are anxious users of weather data, information is provided for altitudes of 1, 3 and 6 kilometres as well as the earth's surface.

The WCAS forecasts don't have the usual phrases about "winter storms", "partly cloudy" skies or rising and falling mercury. Instead, for each location there's a choice of maps: "temperature and wind", with colours for Celsius readings and little arrows for wind direction and speed, or "precipitation and pressure", with isobars showing the air pressure and patches of colour for rain or snow. Control buttons like those on a music player move the view ahead or back in 3-hour jumps.

Forecasts are run once a day, using "an advanced meteorology research model", Sloan says. "Our website shows the actual output of the research forecast model, which means you can follow the progress of the weather systems as they move through our area. This is not done elsewhere. Even the TV weather reports are basically cartoons drawn from the kind of information that we show directly."

He warns that the site is "an experimental service" and "will experience occasional crashes, but we hope to keep these to a minimum."

There's a link to the WCAS site from the main UWinfo weather page (reached from a link at the bottom of the UW home page). It also has links to the UW weather station, with historical data on conditions at the surface on UW's north campus, as well as the familiar public forecasts from Environment Canada and the Weather Network.

And a little of this and that

Yesterday was the official deadline -- but I bet you'd still be okay -- for submitting an Intention to graduate form if you're hoping to receive a degree at spring convocation in mid-June. Says the registrar's office: "Forms are available online for for undergraduate and graduate students. Spring 2005 Convocation dates are June 15, 2:00 p.m., Applied Health Sciences, Environmental Studies, and Independent Studies; June 16, 2:00 p.m., Arts; June 17, 2:00 p.m., Science; June 18, 10:00 a.m., Mathematics, June 18, 2:00 p.m., Engineering. A web page has been designed as a reference to all matters concerning convocation activities. It should answer all convocation related questions or provide links to the proper source for specific inquiries."

A prominent scientist is visiting Waterloo's quantum physicists this week -- Anton Zeilinger, formerly of such institutions as MIT, Innsbruck, Oxford, the Technical Universities of Vienna and Munich, and the Collège de France in Paris, and now professor of physics at the University of Vienna. He'll speak tonight for the Perimeter Institute (the lecture, at 7:00 at Waterloo Collegiate Institute, is a sellout, with the waiting list opening at 6:00). Tomorrow, Zeilinger speaks on campus, at 2:15 in the "B. F. Goodrich" building on Columbia Street (does that count as being on campus?). Title of the talk: "Experimental Interlude 1: Interpretation of Macromolecules". A memo from the Institute for Quantum Computing advises: "His work has received worldwide attention, most notably his first realization of quantum teleportation. In 1997, Zeilinger and his colleagues confirmed aspects of quantum teleportation by actually teleporting light particles -- earning him the nickname 'Mr. Beam'."

A symposium on "The Role of the Bioengineer for the 21st Century" will take place Thursday afternoon and evening, as systems design engineering student Kimberly Luu writes: "From the food we eat to the tools doctors use to treat patients, the bioengineer has played an integral role in each development. The goal of the CUBE sponsored Bioengineering Symposium is to provide students with direction on how engineers can contribute to the emerging biomedical and biotechnology fields. This is the first student run symposium of its kind and has received full sponsorship from the dean of engineering. Speakers include a medical and pharmaceutical engineer, as well as professors and technicians from the fields of radiology therapy and aids for the visually impaired. The keynote for the evening will be Dr. M. V. Sefton, director of IBBME at the University of Toronto. On the agenda is also a poster session to feature the relevant research of our very own graduate students. Finally, the day will conclude with a dinner and meet and greet with the evening's speakers and participants." The event runs from 3 to 8 p.m. tomorrow in the Davis Centre.

The Yume Peace Crane Project comes to the Student Life Centre today, sponsored by the Konnichiwa Japan Club (KonJa). "The goal," writes Haruka Shoji, "is to fold 1,000 origami cranes and raise donation money to send to the Peace Park in Hiroshima, Japan. Everyone (students, staff, friends) is invited! Origami lessons are provided, and you can get a bookmark with your name on it in Japanese calligraphy. One of the supporters for the event is Sweet Dreams Teashop: there will be delicious bubble tea drinks selling (all money towards donation to promote world peace). Other supporters are the Federation of Students, UW clubs and the SLC. It's a nonprofit event for a really good cause." The event -- part of International Celebration Week -- runs from 10 to 5:30 today in the great hall.

It's the second day of Shadow Days in the faculty of engineering, with visits from high school students. . . . The faculty association's Status of Women and Equity Committee is holding a luncheon tomorrow for "consultation" about child care and family-and-career issues. . . . With National Engineering Week continuing, UW engineering students will be at Conestoga Mall tomorrow to show off projects and activities. . . . The "Canada's Response to International Crisis" conference, organized by social work students at Renison College, runs from 8:30 to 4:30 on Friday at the Waterloo Memorial Recreation Complex. . . .