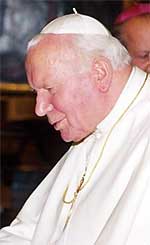 As Pope John Paul II moves toward the end of his life, and the world watches medical bulletins from Rome, Michael Higgins is on the alert.

Already he's in demand, and he's braced for a media onslaught when the Pope (right), who is 84 and has reigned for 27 years, finally dies. The Pope has been hospitalized twice this winter, and speculation has been rampant.

"I work as a papal affairs analyst for four outlets," says Higgins, who says his role as president of St. Jerome's University becomes "my day job" when the CBC, CTV, Maclean's and the Globe and Mail all call for his comments. "I get bombarded with calls," he said yesterday, reporting that one day last week, when the Pope's illness and surgery made worldwide headlines, "both my CTV pager and my CBC cellphone went off at the same time in the car!"

Higgins is author or co-author of several books about Roman Catholic church affairs, but acknowledges that there are other authorities on the papacy in Canada, and of course in other countries. However, he says, he may be the one who's most comfortable in the soundbite world of the media (he writes a column on media affairs for the local newspaper, the Record) and he's known to reporters and editors as a reliable commentator, available to explain the doings of the church and willing to speak plainly but fairly. He prides himself on providing a "measured", not extreme, analysis of personalities and events. "I'm very comfortable being a Roman Catholic intellectual and a Roman Catholic lay leader," he said, "and being critical of the Pontificate."

Says Higgins: "The academy has a responsibility for dealing with the media -- we have an obligation as university professors to help communicate our research and educate the populace. We're educators -- this is our job!"

As the Pope has been in and out of hospital in recent weeks, media interest has been so intense that "it's really rather alarming," Higgins said. He's done a number of interviews, including a two-hour CBC conversation that is "on hold" until the inevitable burst of publicity at the time of the Pope's funeral and the election of his successor.

"When he does die, it will be the news event of the century," the St. Jerome's leader said, citing John Paul's longevity, the "complex" nature of his legacy as a Pope in dramatically changing times, and the public fascination with the process by which cardinals choose a new Pope.

"I will not need to go to Rome," he said, pointing out that in an electronic age, comments can be made from anywhere. He did, however, spend some time thinking about the Pope during a recent visit to Poland on other business; he got away from the main agenda to visit the Pope's birthplace, Wadowice, and other sites associated with him, "to understand his culture and the values that shape him."

Links to online banking institutions to make fee payment easier, and "a grid-based format" to show a student's weekly schedule, are among the features in the new version of Quest, the student information system, which went live yesterday. Bigger changes in the software behind the system will have advantages for the people who operate it, but shouldn't even be visible to students, according to explanations from the registrar's office as the new system comes into use.

"We thank you for your patience during the upgrade process," said an e-mail sent automatically to thousands of students and signed by UW registrar Ken Lavigne. "The Quest website has also been updated and a new help section and website feedback form have been created," he told them.

The familiar uses of the system are still there -- students can update their contact information, add or drop courses, see financial aid information, check their grades and schedules, and so on. "We look forward to adding even more features to serve you better," the registrar wrote.

An e-mail message to academic departments concentrated on the things for which staff and faculty use Quest: looking at class lists, for example, and checking "undergraduate and graduate student academic and application information" through Waterloo Inquiry, successor to the old WINQ utility.

"In addition, instructors can use Quest to view their weekly course schedule and view the UW course catalog and class schedule."

"Thank you to everyone who was involved in this project," writes Jennifer Johnson, coordinator of web and e-communications for the registrar's office. She mentioned a few of those people: Carmen Roecker in scheduling, Audrey Sloboda in the graduate studies office, Fred Widall and Kevin Oberle in information systems and technology, and Ian Read in undergraduate recruitment.

Journalist and filmmaker Avi Lewis will discuss student influence and responsibility on global issues during a visit to UW tonight as part of the third annual International Celebration Week. His topic is "Students of the World Unite: You've got nothing to lose but everything," and the lecture starts at 8:00 in Coutts Hall room 101.

"Avi Lewis will come to campus to reflect on the opportunities and challenges of the global economy for young people around the world, and especially for Canadian university students," says Ryan Chen-Wing of the student life office. "Although student life on Canadian campuses is increasingly filled with challenges, it is also a very exciting time and opportunities for international experiences have never been greater."

Lewis has worked as a broadcast journalist for MuchMusic, Citytv and CBC. At MuchMusic, he hosted the New Music and engaged Canadian youth in the political process with extensive coverage of the Canadian federal election in 1993 and the Québec referendum in 1995. Lewis later hosted "counterSpin" on CBC, where he facilitated discussions of current affairs among newsmakers, analysts and reporters.

Most recently, Lewis has collaborated with his wife, writer Naomi Klein, on a documentary film called "The Take". In it, they examine labour activism and direct democracy amidst globalization and the economic turmoil of Argentina.

International Celebration Week is organized "to celebrate international diversity on campus by exploring concepts of internationalism by highlighting global education opportunities as well as cultural and social events".

Other events today include "Around the World in 180 Minutes", in which students from various countries will present information and pictures about their home countries, starting at noon in the Student Life Centre, and an "International Quiz Bowl" in the SLC later in the day. Tomorrow, noontime activities in the SLC include a "peace mandala" and paper-crane making as part of the Yume Peace Project.