UW has added 160 staff positions in the past four years, and 30 in just the past year, according to figures presented to the senate finance committee as background to the planning of this year's budget.

There were a total of 1,546.0 positions in October 2001, and 1,706.9 positions in October 2005, the three-page summary shows. (Tenths of a position represent the working hours of part-time staff.) The figures don't include staff whose salaries are paid from research funds, or from the budgets of UW-run "ancillary" businesses such as food services and the bookstore. They do include positions that weren't filled at the time the data was collected.

As always, the single biggest department is plant operations, which is listed as having 301.5 hourly-paid staff and another 46.0 salaried staff. (That total of 347.5 is up from 323 four years ago.) Second is the library (133.0 positions) and third is information systems and technology (119.0).

Some departments have seen increases over the four-year period, while others are down -- including the library, which had 140.0 positions in 2001, and distance and continuing education, down from 34.0 four years ago to 31.0 this year.

But increases are notable across the spreadsheet. The total in engineering is up by 35 positions, from 122.2 to 157.2, thanks to sizeable jumps in architecture, electrical and computer engineering and (partly because of the PDEng program) the dean's office. Similarly, the total in math is up from 77.0 positions in 2001 to 99.3 in 2005, with growth concentrated in computer science.

UW Drama's run of "Our Country's Good" might have ended at UW last Saturday, but the adventure is far from over. Instead of going their parting ways, the cast and crew is set to go overseas, embarking on the department's first-ever international exchange. 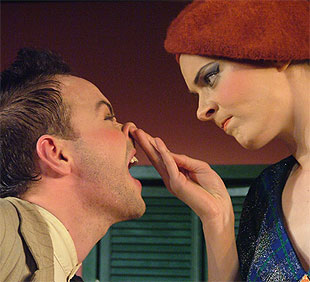 On April 17, acting students from Germany's Theaterakademie Vorpommern will arrive in Toronto to perform Goldoni's A Servant of Two Masters ("Der Diener Zweier Herrn") (right). After two performances at the University of Toronto's Helen Gardiner Phelan Playhouse -- and a formal reception at the German consulate -- they will move their production to UW's Theatre of the Arts (Modern Languages building) for productions on Saturday, April 22, and Sunday, April 23.

Once the German troupe's performances have wrapped up, students from the drama departments at U of T and UW will make their way to Zinnowitz, a "sleepy resort town on the Baltic Sea" in the former East Germany. There, the UW cast will twice perform "Our Country's Good" for German audiences, working in a theatre whose name translates to English as the "Tin Box." ("It looks like one, too," noted a drama faculty member.)

Then the Waterloo cast will become crew as the exchange moves to Anklam, Germany. There, UW students will set up and run the technical aspects of the theatre while U of T students performs two sets of their play, "The Orphan Muses".

The exchange has received support from the Dean of Arts, the Federation of Students and various UW departments. Still, the drama students are passionately fundraising to cover the balance of their costs, working through a variety of creative fundraising efforts. Last Saturday, they held a pay-what-you-can matinee of "Our Country's Good" with the proceeds going towards the exchange. Plans to approach local theatres and K-W's many German clubs are also in the works.

Carol Ann Weaver, music professor at Conrad Grebel University College, will host a pair of benefit concerts tomorrow in response to the AIDS pandemic in Africa. Weaver has composed a piece entitled "Every Three Children" that symbolizes the number of children infected with the AIDS virus in parts of Africa. Says Weaver: "I am trying to think through the concept of a mother losing a child. And it is with that kind of perspective that I am attempting to write this piece in a first-hand sort of way, so that it's not some abstract, 'do-good', politically correct piece of 'information'. Instead it represents (best as I can understand it) a real person's grief at a real child's death." The piece, with live music and actual field recordings of children's singing, is based on Weaver's many trips to Africa over the years. It will be performed twice tomorrow in the Grebel chapel: as the 12:30 free concert and in the 4:30 chapel service. Both events feature Weaver on piano, vocals by Rebecca Campbell, the Chapel Choir, drummer Arun Pal, and guest performers and readers. Both events are free, but cash or cheque contributions towards African AIDS relief work via Mennonite Central Committee and the Stephen Lewis Foundation are invited.

"You've probably heard of UW Innovate! by now," writes one of the organizers of that event, which is scheduled for Wednesday evening. Rajat Suri, a chemical engineering student, says he's expecting "an extremely significant event . . . we'd really like people outside Engineering to appreciate our thrust towards innovation even in the undergrad curriculum." Suri tells more: "Not to be confused with UW Innovate Inc, 'UW Innovate!' is an event geared towards improving the experience and quality of the Fourth Year Design Project that is a requirement for all engineering grads here at UW. For a lot of engineering students, the design project is our first major open-ended problem-solving experience. What often happens is that students pick the easiest and most convenient project at the last moment, which severely reduces the satisfaction and achievement derived from the project. UW Innovate! aims to improve things by bringing students from all departments together to listen informative speakers, meet with experienced professors and industrial representatives, learn about the opportunities in various research areas and most of all forge relationships with other students with similar interests but complementary skill sets. It is targeted at junior engineering students (from 1st to 3rd year). The rest of the campus is also welcome to come and see what problems engineers are considering for the project." UW Innovate! is organized by the student Forum for Independent Thought, and will run from 5 to 8 tomorrow night in the Festival Room, South Campus Hall. Dinner is provided.

This week UW becomes one of the hundreds of colleges and universities worldwide to stage a production of "The Vagina Monologues". Writes English student Stephanie Radcliffe: "The show is entirely student-run and celebrates V-Day, an annual event to raise money and awareness to stop violence against women and girls. With productions from Mexico to Malaysia, UW students proudly join an international contingent of students striving to fight violence against women. Since 1998, benefit productions of The Vagina Monologues have raised over $25 million for charities worldwide. All money raised from UW's production will go towards Mary's Place, a YMCA Kitchener-Waterloo 60-bed shelter for homeless women and their children, and the V-Day charity itself. Originally performed by Eve Ensler, 'The Vagina Monologues' is an award-winning play celebrating female sexuality with intelligence, wit, and humour. Her experiences performing the play inspired her to establish the V-Day charity." The play has three different venues: Wednesday night in the multipurpose room of the Student Life Centre, Thursday in the Bombshelter pub, Friday in Studio 180 in the Humanities building. Showtime is 7:30 each night; tickets are $10 (students $8) at the SLC turnkey desk or at the door.

Coming to campus Wednesday night, sponsored by the "One Waterloo" diversity project, is Minnijean Brown Trickey, who in September 1957 was one of a group of African-American teenagers known as the "Little Rock Nine." Under the gaze of 1,200 armed soldiers and a worldwide audience, Trickey faced down an angry mob and helped to desegregate Central High. This seminal event in American history was the beginning of her long career as a crusader for civil rights. Under the Clinton administration, she served for a time as deputy assistant Secretary of the Department of the Interior responsible for diversity. Currently, she lives in Arkansas, and is continuing her work for civil rights and social equality. Drawing on her experiences, Minnijean Brown Trickey provides audiences with an exploration of social change, diversity, and the battle against discrimination and racism. "Realistic, but at the same time hopeful," we're told, "she helps her listeners to understand both how far we have come from that fateful autumn in Little Rock, and how far we have still to go, in the battle for freedom and equality in both Canada and the United States." She'll speak at 8:00 tomorrow night in the Humanities Theatre, introduced by history professor Andrew Hunt; admission is free.

And . . . this term Orchestra@UWaterloo, the UW orchestra made up of students, staff, faculty and alumni, held a Concerto Competition, sponsored by computer science professor David Taylor. The winner of the competition was a first-year engineering student, Alan Li. He will play Chopin's first piano concerto with the orchestra at their end-of-term concert, "Crossing Borders", on Thursday at 8:00 in the Humanities Theatre. Also on the program: Prokofiev's "Romeo and Juliet" and a piece by local composer Boyd McDonald. Tickets are free but must be reserved through the box office at 888-4908. Donations are welcome at the door.