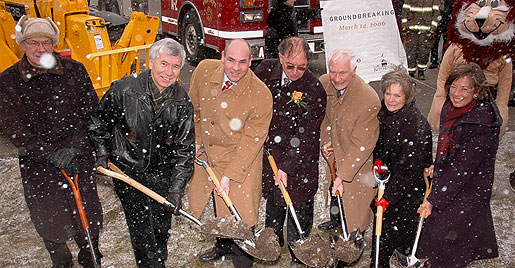 The University of Waterloo opened a new exciting chapter in its history yesterday morning with the official groundbreaking for its School of Pharmacy and Downtown Kitchener Health Sciences Campus.

The event was held at the future site of the latest UW expansion project: the northwest corner of King Street West and Victoria Street in Kitchener's core. George Smitherman, Ontario's Minister of Health and Long-term Care, was among the officials attending the ceremony.

"Today marks the realization of an important dream for both the University of Waterloo and the City of Kitchener," said Kitchener Mayor Carl Zehr. "And this wouldn't be happening without a unique collaboration between two organizations with vision. We're very proud of this project, it's an absolutely remarkable investment in the future of our city."

"It is truly a historic day for our university and for Waterloo Region as we embark on this innovative development," said UW President David Johnston. "We are so fortunate to have a committed partner like the City of Kitchener, that believes in this project as passionately as we do. The School of Pharmacy will mean great things for Kitchener, for UW, and for the future of health care."

"After so many months of hard work, it is incredibly gratifying to see our new facility begin to take shape," said Jake Thiessen, Hallman Director of the School of Pharmacy. "We have the privilege of starting from a blank slate, at a world-class University, and we have been embraced by this community in an unprecedented way. Our building will reflect our desire to be a fundamental part of the community, and to expand the horizons for Pharmacy in Canada."

The innovative project builds on Kitchener's $30-million commitment and gift of land to the university. Anchored by the new School of Pharmacy, the UW Health Sciences Campus will ultimately include a satellite of McMaster University's Michael G. DeGroote School of Medicine, an optometry clinic and the Centre for Family Medicine, a residency program for students wishing to specialize in family medicine.

The Health Sciences Campus will attract a wide range of health professionals and address the need for expertise in health technology, health informatics, biosciences, population studies and biomedical engineering, while filling the urgent demand for more pharmacists and doctors in Ontario.

How to develop leisure activities to promote health and reduce risky social behaviours among young people is the aim of the Hallman Visiting Professor Lecture this Thursday.

Hosted by UW's Faculty of Applied Health Sciences, the public talk will be given by Edward Smith and Linda Caldwell, whose research in the area began when they were at UW in the 1980s. Their paper "Leisure: An Overlooked Component of Health Promotion" appeared in the Canadian Journal of Public Health in 1988. Now on the faculty of the Pennsylvania State University they'll be speaking tomorrow on "Leisure and Health: Joining Forces to Prevent Youth Risk Behaviour."

The lecture starts at 4:30 p.m. tomorrow in the Lyle S. Hallman Institute for Health Promotion, Matthews Hall room 1621. Admission is free, but space is limited, so RSVPs are urged (phone ext. 2010).

Smith and Caldwell have done research on how to develop leisure-based interventions for school environments aimed at preventing substance use, HIV/AIDS and risky sexual behavior of youth. Their applied work has been conducted with colleagues in Pennsylvania, Germany and South Africa and has involved more than 8,000 adolescents.

The presentation will describe the evolution of their joint research and describe the evaluation of two interventions that they have developed: TimeWise: Taking Charge of Leisure Time; and HealthWise South Africa: Life Skills for Adolescents. They will also discuss issues about adapting programs to international contexts and policy.

Caldwell is a professor of recreation, park and tourism management in the College of Health and Human Development at Penn State. Her research interests focus on the intersection of youth, leisure, and health domestically and internationally. Smith, director of evaluation research for the Prevention Research Center at Penn State, conducts research focusing on the design, implementation and evaluation of school-based programs to improve the lives of adolescents. Key areas of the initiatives include the prevention of substance abuse, risky sexual behaviour and other problem behaviours.

Notes on the morning after

It was "Googlemania" on campus last night, says the Globe and Mail, describing lineups to get into Federation Hall for

a recruiting session for the search engine firm, and a celebration of its recently-established office in Waterloo. The company bought local firm ReqWireless -- which specialized in mobile applications -- last year, kept its staff and facilities and has been expanding. This morning's Record quotes Roger Skubowius, director of the Waterloo office, as saying that "Although it is adding about one person per week, the office has yet to expand greatly beyond ReqWireless' market sector, but Google hopes to change that by hiring talented engineers and other computer professionals." As for last night's event, "It was essentially a showing-and-planting-the-flag event," student Michael Fagan writes in his blog. "I did hear that they want to expand the Waterloo office with engineers as fast as they can. It seems that wherever they are now is probably a somewhat temporary location." Yesterday's campus visit also drew attention from the ITbusiness.ca blog.

There's a special general meeting of the faculty association this afternoon. Says association president Roydon Fraser: "To inform FAUW members of the status of salary negotiations and to make members aware of some changes that are likely as a result of the elimination of mandatory retirement, a special confidential general meeting of members of the FAUW is scheduled. This meeting is also the opportunity for members to provide feedback on the new salary agreement that seems to be shaping up." The event starts at 3:30 in Math and Computer room 4059.

Howard Burton (right) of the Perimeter Institute was the speaker last year for the annual Friends of the Library lecture, a fixture in the early part of the spring term at UW. The library has just announced that this year's noontime event will be held Wednesday, May 24, and that the speaker will be dean of engineering Adel Sedra. An invitation has gone out for participants in the other half of the Friends celebration, the "authors event": "We will also honour members of the university community who, in 2005, authored a book, composed a musical score, were recognised for their design or photography work, or mounted an art show." Information should go to Cheryl Kieswetter in the library administrative office, ckieswet@library.

Nominations closed the other day for this year's teaching award (and librarianship award) from the Ontario Confederation of University Faculty Associations -- the most distinguished Ontario-wide awards in the field. Nominations can come from many directions, but some effort comes from high administrative levels to make sure there are good nominations submitted for at least some Waterloo teachers. Gail Cuthbert Brandt, acting associate vice-president (learning resources and innovation), reports that her office sent in two names, both of them former winners of UW's own Distinguished Teacher Awards: Lyndon Jones of the school of optometry (a 2005 winner) and Larry Smith of the economics department (1993). OCUFA winners should be announced in May.

Finally: in yesterday's Daily Bulletin I said that the architect's drawing of the soon-to-rise Photovoltaics building showed it from the north side. A number of people have pointed out that solar panels facing north are not likely to be very effective. Apparently the "seen from the north" detail was a figment of my imagination, which should be a relief for anybody who hopes that the panels will really generate electricity.