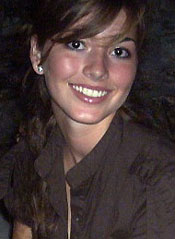 "I've wanted to study abroad ever since I can remember," says one of UW's newest international students: Aléjandra Sanchez-Franks (left), a first-year student in mathematics based at St. Jerome's University.

As the university's International Celebration Week begins, Sanchez, from Merida in southeast Mexico, explains why she's here: "Experiencing a new culture and exposing myself to an entirely foreign and exotic lifestyle is an idea that has always been very appealing to me. The older I got the more this idea grew on me. Finally, in my last years of high school I decided I wanted to be a mathematician. The University of Waterloo has the best faculty of Mathematics in North America (and I want to say the world!). It seemed only natural that I apply to the faculty of mathematics in the University of Waterloo, so I did."

What does she miss from home? "Although I would kill for some hot Mexican candy, I miss my family the most, my best friends and of course the ocean." And what's been difficult to get used to in Canada? "The weather, by far! I come from a place that has an average of 30 to 40 degree weather. Even our winters are hot. So, trekking about campus in freezing temperatures and cruel winds is quite the harrowing experience."

But, she says, "Culturally speaking, Waterloo is different from anything I've ever known and I love that. I also love the people here, they're really friendly and funny -- they crack me up!"

Mexico is one of the countries where UW is focusing efforts to attract more international students. Waterloo will have a booth this weekend at the CONACYT education fair in Mexico City. "Two of our alumni will be working on behalf of UW to promote graduate studies," says Tracey Sinclair, recruitment manager in the grad studies office. They're Francisco Zaragoza Martinez, who earned a PhD two years ago in combinatorics and optimization, and Gabrijela Mecky, a 1999 MA graduate in German.

Also tonight and tomorrow will be a Warrior Weekend with evening activities in the Student Life Centre, this time offering an international spin to the events. Some of the highlights include salsa dance lessons, henna tattoos, origami making, and multi-cultural cuisine for students to try international dishes like spanakapita, spring rolls and samosas.

Users of the campus wireless networks will notice something new starting this month: a computer virus test that their machines will have to pass in order to use anything wirelessly beyond just the Web.

Already introduced on the engineering network, where it was developed, the new program -- MinUWet -- goes campus-wide as of March 16, by decision of the Campus Network Advisory Group.

"Users are encouraged to test their Windows systems in advance, which is easily done by going to the test page," says Erick Engelke of Engineering Computing, who created MinUWet. He gives some background: "Poorly managed Windows clients are our greatest computer security problem. Unfortunately our best efforts to encourage good laptop management have not been enough to sway all users. Every day we continue to see compromised laptops causing problems.

"The present solution of chasing compromised computers is after-the-fact, and it isn't a scalable use of campus computing personnel, particularly as wireless usage ramps up due to affordable laptops.

"In our new solution, wireless access continues to be controlled by the venerable NAA (Network Authentication Appliance) written by Bruce Campbell of Science Computing. But Windows users hoping to use more than the basic web must now run MinUWet.

"MinUWet tests the computer for minimal UW recommended standards compliance of having an antivirus product installed and Windows updates enabled. If the computer passes, the user is granted premium network access. But if it fails, users will be limited to web-only access (http and https protocols).

"The solution has been running successfully in Engineering for two weeks. We are finding a quarter of all laptops do not meet initially these standards. But half of those users later fix their machines and are immediately upgraded to full access." Engelke adds that non-Windows systems such Macintosh and Linux "will not need or even see MinUWet".

Hot news in a cold country

So a student from Mexico finds Ontario winters remarkable. Here's what an expert has to say: "February certainly felt a lot colder after the extremely warm January we had," writes Frank Seglenieks from the UW weather station, "but historically February was actually a little bit warmer than average. The average daily high was minus-1.5 C compared to the minus-1.9 we would expect, close enough to the average to classify it as an average month for temperature. However, looking at the actual temperatures during the month it always seemed that we were either well above or well below average: warm in the beginning, followed by a cold snap, then warm temperatures associated with the major rain event, and ending with another set of cold days." That "major rain event" was the 38.5 millimetres, more than an inch, of precipitation that fell on Thursday, January 16, the day UW (and everything else in town) was closed in anticipation of freezing rain. That was followed, Seglenieks notes, by a "flash freeze" on the 17th: "The temperature was 7.5 C at 3:15 a.m., dropped to 1.6 at 4:15, minus-2.4 at 5:15, and then to minus-6.1 C by 6:15 a.m., just in time to freeze all the pooled meltwater and make things treacherous for people getting to work." Ah yes, just another Ontario February. Students who intend to graduate this June need to fill out, naturally enough, an Intention to Graduate form -- indeed the official deadline, March 1, is already past, but forms are still available online. Spring 2006 Convocation this year is June 14-17, and the registrar's office is drawing attention to a change from past practice: "Please note that there eight ceremonies rather than the previous five; some splits apply. All you need to know about Convocation is available online. This web page has been designed as a reference to all matters concerning convocation activities. It should answer all convocation related questions or provide links to the proper source for specific inquiries."

Co-op students whose work reports about fall term jobs have been marked by coordinators can pick them up, starting today, in the Tatham Centre. . . . Architecture students begin their spring interview season with a trip to Toronto en masse today to meet with architectural firms there. . . . An On-Campus Part-Time Job Fair will be held Monday (11:00 to 2:00) in the Student Life Centre, with information about student jobs across the university. . . .

Today's the deadline for the photo contest that's being sponsored by the UW Shop: "travel anywhere, take a picture wearing UW wear, submit your picture," and potentially win an iPod Shuffle. Meanwhile, a winner will be announced Monday in another UW Shop promotion, the "30-Second Shopping Spree", just as the shop reopens following several weeks of renovations on the concourse level of South Campus Hall. A "grand reopening celebration" for the shop, which carries UW clothing, souvenirs, jewellery and gifts, is scheduled for March 21.

Tickets will be available starting Monday for one of the big events of the term: a talk on April 3 by Roméo Dallaire, the Canadian general who represented the United Nations in Rwanda during the 1994 massacres there. Dallaire is the keynote speaker for this year's Graduate Student Research Conference, and grad students who are taking part in the conference can pick up their complimentary tickets for the lecture at the door, or between Monday and the end of March at the graduate studies office in Needles Hall. Other people who want to hear the talk will pay $2 a ticket, at the Humanities box office.

Chris Hanton-Fong in UW's earth sciences department sends word of the sixth annual Hopespring Cancer Support Centre Curling Fundraiser, put together by the Earth Sciences Alumni Corporate Challenge group -- a small group of staff and alumni, largely from local environmental companies. "This year's bonspiel," she writes, "will be held this Sunday from 9 to 6 at the Westmount Golf and Country Club. The event, which last year raised $10,000 for Hopespring, is run in memory of Gail Bendig of the department, who died in 1997. Three teams from within earth sciences are among the 14 entries expected in the bonspiel. Spectators are welcome." Anyone who's are unable to attend but would like to support the event and donate to HopeSpring can reach her at cjhanton@uwaterloo.ca.

Pick Your Plan Week for undergraduate students, a chance to make changes to majors, minors and options, winds up today. . . . The campus recreation program is offering an intensive Red Cross "First Responder" first aid program this weekend and again the middle weekend of the month. . . . Joel Greenberg of UW's drama department is director and co-producer of "The Arab-Israeli Cookbook", opening tonight at Toronto's Berkeley Street Theatre. . . .

International Women's Week is coming up, and a number of events will be held on campus, sponsored by the Federation of Students Womyn's Centre. According to the ads, they include self-defence courses, a panel discussion by women entrepreneurs, a "comedy cabaret" on Tuesday night, and a Thursday concert in the Bombshelter pub.