Tomorrow brings the first in a series of special presentations as the faculty of arts launches Arts Research Seminar Month. (Yesterday's Daily Bulletin jumped the gun and said the first seminar in the series was being held today. In fact it's Wednesday.)

"Our professors are researching a vast array of fascinating fields in many exciting and innovative ways," says Heather MacDougall, associate dean (graduate studies and research) in arts. "This public event is part of an ongoing range of research development activities in the Faculty of Arts. A key aim of this series and other activities is to promote a greater sense of the interdisciplinary academic community and a greater awareness of research in its many forms."

The month will feature seminars and workshops designed to be of broad interest to faculty members and students from across campus, as well as the local area community. MacDougall said it aims to encourage people to develop a desire to learn, inquire and reason -- "that's what a liberal arts education is all about."

Tomorrow brings a session led by professors Jane Buyers of fine arts, Bill Chesney of drama and speech communication, and Ken Hull of music (Conrad Grebel University College). They'll discuss "Art in the Academy", from 11:00 to 12:30 in Humanities room 373. The three faculty members will discuss current issues that surround the incorporation of artists, artistic practice and artistic methods of research (especially practice-based research) into the university setting. Part of the discussion will focus on how art can be properly seen and evaluated as research.

The rest of the seminars and their topics: November 9, "The Division of the Disciplines: Historical Perspectives." November 16, "Children Learning to Talk: A Meeting of Minds." November 18, "The Humanities in an Age of High Technology." November 23, "International Relations and Human Rights: Defining a Role for Canada." November 25: "Creating Oral Histories." November 30: "How to Critically Evaluate and Use Existing Survey Data: Info for All Disciplines." 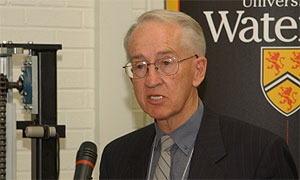 Here's more from the release: "Though he officially retired in 1996, CPATT's founding director and senior adviser has continued to teach and conduct research at Waterloo. Haas (right, at last week's opening) holds the Norman W. McLeod Engineering Professorship, made possible through a generous endowment from the late John J. Carrick, founder and president of McAsphalt Industries Ltd., and his longtime business partner, Leo McArthur, President of the Miller Group.

"A Member of the Order of Canada and a Fellow of the Royal Society of Canada, Haas pioneered the systems concept and development of engineering technology for managing networks of paved roads, together with his contributions in materials characterization and structural analysis, performance modelling, high speed automation of in-service pavement evaluation and network optimization procedures.

"His innovations have led to many management and economic benefits for public transportation agencies in Canada and around the world. He is the author of 10 books and 400 technical papers."

In studying the preservation and replacement of Canada's $3 trillion worth of public infrastructure, CPATT's work draws on structural design, construction and maintenance technology, materials and geotechnical engineering, field evaluation methods, equipment and data processing, intelligent transportation systems and safety, as well as risk and reliability methods. It operates on millions of dollars provided by government agencies -- including the Regional Municipality of Waterloo -- and private sector firms interested in improvements to roadways.

Over decades, the program has produced more than 50 students with graduate degrees, most of them now well established in the Canadian paving industry; more than 400 technical publications in Canada, the United States and around the world; and successful completion of at least 100 research projects for a wide variety of clients.

CPATT's research facilities include the new John J. Carrick Laboratory on the UW campus, and a field lab, located at the Waterloo Region Waste Management Facility off Erb Street West. Says the news release: "Its research work focuses on the advancement and optimization of conventional pavement technology, which will also involve exploitation of the latest technologies from other disciplines. Examples include the deployment of advanced wireless technologies for automatic field data collection and generation of pavement performance data bases -- essential for pavement engineering modelling and management.

"As well, the work focuses on research particularly relevant to Canada, such as low-temperature pavement research, concrete durability, and use of polymer and recycled rubber for upgrading pavement performance."

Stepping down as director of CPATT, Haas will continue as a senior adviser, together with adjunct professor Gerhard Kennepohl, who is an internationally recognized scientist and engineer in the pavement field. CPATT's new director is Carl Haas, recently appointed as Canada Research Chair in the Construction and Management of Sustainable Infrastructure. He comes to UW from the University of Texas at Austin. Susan Tighe, Canada Research Chair in Pavement and Infrastructure Management, becomes associate director for technical activities, while mechanical engineering professor Carolyn Hansson becomes associate director for external liaison.

Thousands of co-op students -- including some who will be starting their very first co-op job in January -- will find out today where they're employed for the winter term. Job match results will be posted on JobMine at 11:00, following the weekend's ranking exercise. Soon to follow: meetings for those whose jobs are confirmed, and meetings (plus new job postings) for those who don't yet have jobs. Meanwhile, accounting students, who are on a separate cycle, continue their interviews for next term; and interviews are also going on at the Architecture building in Cambridge for students in that program. Ontario University Athletics is holding something called the Women of Influence Luncheon today at Toronto's Royal York Hotel, and among the women being honoured is Caroline Amyot, a key player on several Warrior teams. The luncheon, part of a series of such events, will recognize "the top female scholar-athlete from each OUA institution". Says the OUA citation for Waterloo's star: "Amyot is an athlete who loves a challenge. While some find it difficult to compete well in a single sport, the Barrie native is able to excel in three -- swimming, cross country and rowing. Amyot has concentrated more on swimming recently and that training has proved beneficial for one of her other athletic passions -- triathlons. She enters about eight to 12 races per year and in 2004, she represented the University of Waterloo at a World Triathlon event in Spain. Amyot completed her Masters of Science degree in Civil Engineering and now holds a research position at the university. She maintained an 87 per cent average in grad school this past year and hopes to continue her studies in the field of research and innovation."

Mohammad Maymandi-Nejad (right), a graduate student in electrical and computer engineering, is this year's winner of an award from the Strategic Microelectronics Council. The award recognizes "industrial collaboration", and Maymandi-Nejad was cited for his project entitled "A Wireless Bio-Implantable Device for Monitoring Blood Pressure of Transgenic Mice". The award brings a cheque which "should be used for travel costs supporting further interaction with Canadian companies or attendance at one or more conferences or workshops to further the education of the winner".

The environmental journal Alternatives, published at UW, is looking for an editorial assistant for the winter, who would be a student working under the UW Work Placement program. . . . There's still room for a vendor or two at the November 24-25 craft sale sponsored by UW's staff association, says Sue Fraser of the association social committee (ext. 2968). . . . Teresa Boake of the school of architecture is winner of a $35 gift certificate from retail services, after a draw from among United Way donors. . . .

Emilie Falkenstern, a former member of UW's staff, died October 3. She was a housekeeper in Village I, working from 1965 until her retirement in 1977.

The UW Shop is promising a "monster sale" today and tomorrow in the multipurpose room of the Student Life Centre, "featuring great deals on UW clothing". . . . The retirees association is holding a luncheon today in the restaurant at Luther Village, just south of campus. . . . The Muslim holy month of Ramadan winds up tomorrow, meaning that tomorrow's the last day Mudie's cafeteria in Village I will be opening at 5 a.m. for a pre-dawn meal. . . .