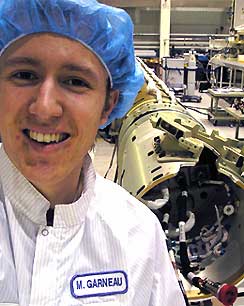 A UW student -- Benjamin Sanders of electrical engineering, who's active in the Waterloo Space Society -- is in the Netherlands this week for preliminary training in preparation for an experience of airborne weightlessness this summer.

Sanders is pictured at right at the David Florida Laboratory in Ottawa, where he had his co-op job this term with MDA (formerly MD Robotics) helping to build and test an extension to the Canadarm that will go aboard the shuttle Atlantis. Yes, that's a lab coat belonging to Canadian astronaut Marc Garneau that he's wearing for the occasion.

He explains what this summer's adventure, headquartered in Bordeaux, France, is all about: "By flying in a roller-coaster-like pattern, the aircraft can simulate short bursts of weightlessness. As the plane crests the top of each parabola and begins a steep descent, everything inside the cabin will float for up to 25 seconds." This summer, he and his team will experience roughly 60 of these parabolas over the course of two separate flights. Their experiment will investigate the effect of varying gravitational pull on the human eye in order to better understand how increased ocular pressure can affect one's visual field.

Canadian Astronaut Dave Williams is supervising the Canadian team, which includes students from Queen's, McGill and Alberta as well as Waterloo's Sanders. He may even fly with them aboard the craft that space enthusiasts have dubbed "the Vomit Comet" for its effect on the human system. Their project involves the impact of weightlessness and gravity on the human eye. Sanders said Rob Gorbet, a faculty member in UW's electrical and computer engineering department, is helping the students design the equipment they'll use.

Cuts to UW's spending for the coming year "will only be implemented after Ontario budget information becomes available", according to documents that are going to the senate finance committee this afternoon and then to the senate itself.

Final approval of the operating budget, which shows total spending of $317.6 million (up from this year's $298 million), will come from the board of governors, which meets April 5.

The budget, to be proposed by provost Amit Chakma, involves a 1 per cent cut to most departments' spending -- trimming almost $2 million from activities in both academic and non-academic areas. At the same time, there's some $20 million in new spending for salary increases, extra pension fund contributions, enrolment expansion and "strategic" priority areas.

The provost is predicting that UW's revenue will rise to $316.4 million in 2005-06, thanks to growth funding from the provincial government and a boom in international student enrolment. Tuition fees for Canadian students are frozen by government edict, but fee revenue will still go up by some $8 million (to a total of $119 million) as more overseas students come to Waterloo.

A 1 per cent cut is less than Chakma had hinted a few weeks ago, and less than the cuts that have become familiar as the past few fiscal years have started. In part that's because the budget is allowing for a deficit of some $1.3 million in the coming year.

The big question mark remaining in the budget is the level of provincial government support for the coming year. The budget is leaning to the cautious side, showing no increase from this year's basic operating grant from the province ($105.7 million) and only partial increases in the "growth funding" and other special-purpose grants, where the province hasn't always met the full cost in past years. But it remains possible that a happy surprise could come in the provincial budget, expected from finance minister Greg Sorbara later this spring.

The finance committee, which represents faculty and student senators as well as deans and other officials, will meet at 3:30 today in Needles Hall room 3004.

A paragraph that allows the fast-tracking of "exceptional candidates" for faculty positions at UW will be added to Policy 76, "Faculty Appointments", if the university senate gives its approval today.

The new language, along with a section on "spousal appointments" and some other policy changes, has been approved by the faculty relations committee and comes to senate from its co-chairs -- Amit Chakma, the provost, and Roydon Fraser, president of the faculty association.

Here's the new paragraph proposed for Section V of the policy: "The opportunity to recruit uniquely qualified, internationally recognized scholars may necessitate prompt hiring decisions to attract such individuals to become UW faculty members. In such cases, with the recommendation of the [Department Advisory Committee on Appointments] involved in the proposed hiring and in consultation with the [Vice-President, Academic and Provost], the Dean(s) may waive normal hiring requirements. The following process will then ensue. After a departmental presentation by the candidate and upon a positive recommendation from the DACA(s) with the approval of the Dean(s) and VPA&P, the candidate may be offered a position. The VPA&P will provide an annual statistical report on such cases to Senate, with special attention to gender balance."

A new Section VI notes that "increasingly, recruiting involves couples who are both academics," and observes that "it is desirable for UW to benefit from the combined excellence of both the recruit and the recruit's spouse. Spousal appointments are intended as positions from which the spouse may find a more permanent position."

A spouse can be hired without "advertising and competition" for the job, the section says, but otherwise, the normal requirements and approvals must be met. "The spousal appointee should be of such calibre that when the next vacancy arises in the department/school, he/she would be a credible candidate for that position. The spousal appointment normally is a Definite-Term Appointment, and normally is for a term of up to three years."

Elsewhere in the policy, the faculty relations committee is recommending a new statement about excellence: "UW is committed to recruit the best faculty possible, within the context of its budgetary considerations and academic programs, as well as priorities such as faculty renewal and employment equity. Faculty recruitment will be carried out through the application of the highest standards and best practices. Recruitment of faculty of the highest quality is a very competitive process and as such requires prompt actions on the part of all involved."

The end is nigh, et cetera

Our days are numbered, as the last full week of the winter term is under way. Classes will end Friday in the engineering and mathematics faculties, though they continue through next Tuesday, April 5, in the other four faculties. Exams begin on Friday, April 8. In preparation for the crunch season, round-the-clock operation of the Davis Centre library began this weekend, while the Dana Porter Library has extended its opening hours to 2 a.m. nightly.

And with the spring term just over the horizon, a memo from May Yan of retail services warns that "the bookstore is returning the remaining winter 2005 textbooks to the publishers beginning this week, to make room for the spring textbooks." She adds that texts for spring term distance education courses are already available, in the DE section of the bookstore.

Students begin voting today in a referendum on whether to terminate the $4.75-per-term refundable fee that supports the Waterloo Public Interest Research Group. Online voting began at 8:00 this morning and continues overnight and until 8 p.m. Tuesday. On-campus polling stations are in operation in seven campus buildings, including the Student Life Centre, though the Federation of Students hasn't actually announced the polling hours.

Last call: An invitation for for nominations was issued a few days ago for some 20 seats on the UW senate, representing faculty members (in various groupings) and graduate students. The deadline for nominations is this Wednesday; full information is available on the university secretariat's web site.

Six winners of gift certificates and other goodies have been announced following this month's Keystone Campaign donor draw. "When you donate to the Keystone Campaign," organizers like to say, "UW wins and you can win too!" Details are posted, as always, on the Keystone web site.

A course called "Serving a World of Customers" is being offered April 12 as part of the staff training and development program, and spaces are still available, says Carolyn Vincent in the human resources department. What's the course all about? "In the world of stellar service, there's no room for a one-size-fits-all approach. Each customer is different and deserves to be treated with his or her unique differences clearly in mind. Differing customer service needs may include, taking into consideration language ability, physical ability, technological ability and culturally-dictated expectations. Serving a World of Customers helps participants to recognize the dangers of labelling and stereotyping customers. As well, learn how to recover when well-meaning efforts go awry. The module focuses on how to provide helpful, attentive, and sensitive service to customers no matter what the differences happen to be." The course is also being offered this Thursday, but that session is full. Anyone interested in the April 12 version of the morning-long course can call Vincent at ext. 2078 for information and to register.

Nominations for president and vice-president (corporate affairs) of the Graduate Student Association are due by 5:00 tonight. . . . The latest issue of the Iron Warrior engineering newspaper announces that the end-of-term "bus push" event (which didn't get much advance publicity) raised more than $5,000 to support the Heart and Stroke Foundation. . . . I understand that special events are being organized over the next few days for Israeli Culture Week. . . .