The board of governors gave approval yesterday to progress on several campus building projects -- including "the conceptual design" for the new school of pharmacy building in downtown Kitchener.

The board was told that two firms, Robbie/Young + Wright Architects and Hariri Pontarini Architects, have been working with "the client group" for the new school, including its director, Jake Thiessen, and officials from the city of Kitchener.

The $34 million first phase of the project is for the pharmacy school itself, while a future phase will house a Centre for Family Medicine Teaching and Research "and some ancillary space which may include a commercial pharmacy", a report to the board said. "The intent is to have these two blocks create a courtyard."

Phase 1 includes an office tower right at the corner of King and Victoria Streets, and an attached four-storey L-shaped structure for "classrooms, a library/resource centre, a food outlet and teaching and research labs". . . . Sustainable building design will be incorporated where possible. The intent is to create a state-of-the-art building to attract top quality students and faculty and support the revitalization of the area."

The city of Kitchener is preparing to transfer ownership of the land for the pharmacy school -- an "eight-acre brown field site" -- to UW within the next few months.

Yesterday's board meeting also approved a $3.5 project budget for a three-storey building that will house 2,000 networked computers for Sharcnet, the Shared Hierarchical Academic Research Computing Network, a multi-institution project led by the University of Western Ontario and financed by federal and provincial governments as well as private-sector partners. The building is to provide a link between Engineering III and the Physics building.

The board approved a $9 million project budget for a planned expansion to the Optometry building -- an increase from the $5.7 million approved last year. The project is being increased from the planned 16,000 square feet to 24,000 square feet, the building and properties committee told the board. Between Campaign Waterloo gifts and revenue from increased enrolment, the optometry school is expected to pay off the $9 million within nine years.

And the board approved a process for appointing an architect for the new building that will house quantum computing and nanotechnology engineering -- being called the "Quantum Nano-Centre". Preliminary cost of the project: $70,275,000. About half the money is available so far, the board was told.

"This is quite a historic moment," said president David Johnston, pointing to the huge promise of these two new fields of research and teaching, and noting that $70 million makes the Q-N Centre the biggest construction project UW has ever had. (The Centre for Environment and Information Technology, opened last year, cost $36 million.)

Federation of Students president John Andersen said there has been some student unhappiness about the proposed site for the Q-N Centre -- the open space west of the rock garden -- but "it's going to be addressed at the building and properties committee" and he didn't want to open a debate at the board meeting. "We had a very healthy discussion," agreed committee chair Mary Bales.

Yesterday's board of governors meeting approved the sale of a UW-owned building at 195 Columbia Street West -- the "B. F. Goodrich building" -- to Research In Motion, which owns the neighbouring property at the corner of Columbia and Phillip Streets.

Various departments and centres have used parts of the building over the past 14 years. It currently provides space for the Institute for Quantum Computing, parts of the school of accountancy and Germanic and Slavic studies, CRESTech (the Centre for Research in Earth and Space Technology, an Ontario "centre of excellence"), and the Canadian Water Network.

Terms of the deal are that UW will lease the building until April 30, 2008, with the right to vacate all or part of the space sooner if it chooses. Annual rent will be a percentage of the selling price of the building. UW will continue to look after the maintenance as long as it's in the building.

Three storeys of new space at the Lyle S. Hallman Institute for Health Promotion, home to units of UW's faculty of applied health sciences, had an official opening yesterday. The 27,000-square-foot addition to the Hallman wing of Matthews Hall was made possible by a gift of the late businessman Lyle Hallman. Four years after funding the institute named in his honour, which promotes healthier lifestyles for Canadians, Hallman donated an additional $4 million for the expansion. 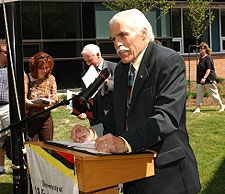 During the opening, a donation of $180,000 from the Lyle S. Hallman Charitable Foundation was announced for the local Kids in Action program for children who are overweight and obese. "We are honoured to continue our involvement with UW's faculty of applied health sciences -- and the legacy of our father -- with this donation to assist the innovative Kids in Action program," said Susan Remple for the foundation. "The program gives children in need a place to go for hope, encouragement, support and opportunity."

Kids in Action is a partnership with registered dietician Lynn Van Zoost at Grand River Hospital; Stephanie Evans, a physical activity specialist; Mike Sharratt, UW's dean of AHS (right, at yesterday's event); and student volunteers who have helped children with the activity program and assisted with documenting their improvements.

The 10-week program has been in operation for two years with volunteer resources and focuses on changing the eating and physical activity behaviour of children to alter firmly entrenched bad habits. The Hallman funding will allow the program to increase the number of participants and sessions, while new and improved equipment will be made available. There will also be increased marketing and promotion of the program to raise awareness and increase enrolment.

The first floor of the new space, facing the Columbia Street entrance to the south campus, houses the Centre for Behavioural Research and Program Evaluation, the non-clinical research and evaluation arm of the National Cancer Institute of Canada. The only research centre of its kind in the world, it works with cancer agencies and community groups across Canada to improve the quality of life for cancer patients and their families. Roy Cameron, the centre director, and fellow researchers have funding of $11 million from the cancer institute over five years and many research opportunities but lacked the space for expansion in the previous facilities.

The second floor is home to the Population Health Research Group, formerly the Health Behaviour Research Group, which began 25 years ago as the Waterloo Smoking Projects. Over the years, PHR has broadened its research focus to reduce death and illness associated with chronic diseases such as cancer, heart disease, stroke, lung disease and AIDS. Researchers work in partnership with national, provincial and local government and non-profit agencies on the development, implementation and monitoring of public policy, health services and mass communications. PHR's 18 researchers and 25 staff had outgrown their previous facilities in the Mathematics and Computer building.

On the third floor is the Centre of Research Expertise in Musculoskeletal Disorders, which involves researchers in studies to reduce the burden and severity of repetitive strain injuries, cumulative trauma disorders and musculoskeletal injuries.

Also on the third floor is "ideas for Health," the health informatics group, with key faculty members Jose Arocha, John Hirdes, Ian McKillop and Trevor Smith. Health informatics is the management of information as it relates to health research, care and policy. It is a relatively young field focused on research, development and application. The "ideas" expansion provides a "high-tech, high-touch environment", with an oasis for interaction and reflection, smart room, "knowledge collaboratory", workstations and an Innovation Showcase to display informatics applications.

During yesterday's ceremonies, a blue beech tree was planted near the building as a memorial to Hallman.

Renison College held a ground-breaking last night for its new Academic Centre, which will include a library and archives as well as classrooms and office space. "The Walter Fedy Partnership is the project's architect," says a Renison news release, "and Melloul-Blamey Construction is the project manager. The Bank of Montreal (BMO) is the financial partner. . . . The new Academic Centre will open Spring 2006. The College is bursting at the seams; the shortage of teaching and study facilities has become critical. Redressing this situation is possible only because hundreds of friends, faculty, staff, students, and alumni have given generously to the 'Working Together -- Building Our Future' building campaign."

Speaking of campaigns, and contributions from staff and faculty: the annual open-air celebration of the Keystone Campaign is scheduled for tomorrow. Keystone has raised $4.5 million in three years, as the on-campus segment of Campaign Waterloo. Tomorrow's festivities are "a celebration of the campaign's incredible success and the kickoff of the annual Keystone Campaign appeal programs", says campaign manager Jennifer Lorette -- hinting that Keystone isn't winding up just because its original goal was achieved, two years early. Staff, faculty and retirees are invited to join in parades up the two sides of the ring road, starting at 11:30 tomorrow morning, and head for the Matthews Hall green for food, games, music and draw prizes. ("Dress in party gear.") There's an after-dark equivalent of the noon event, starting at 10:00 in South Campus Hall, for night staff.

The four systems design engineering students who are finalists in The Walt Disney Imagi-Nations Design Competition will be heading for Disney headquarters in California tomorrow for the last stage of the contest. "We will be participating in various events at Disneyland on the week of June 13, including the presentation of our project to the Disney executives," says Erin Yu, who developed DIVA -- Disney Interactive Virtual Adventure -- along with Bonny Lau, Eric Lee and Jenny Yeung. It was an eight-month project supervised by Tom Carey of management sciences and Rob Gorbet of electrical and computer engineering. The project "employs various motion-tracking and image-processing technologies to allow visitors to navigate through a virtual space using body motions," Yu said.

The digging is pretty small-scale as Waterloo city crews work on a sewer line, but University Avenue eastbound is still closed from Westmount Road to Seagram Drive, and city buses are detouring by Westmount and Columbia Street. . . . Participants can still sign up for this week's Commuter Challenge, an effort to get people to travel to work or school by bike, foot or bus rather than driving. . . . Today is "Clean Air Day", says the UW Sustainability Project, which is planning "a bubble party" outside the Student Life Centre from 11:30 to 12:30, and a screening of "Oil on Ice" in the SLC multipurpose room at 2:00. . . .