Beer analysis, and other green stuff

I spent a few minutes yesterday looking over the displays in the Environmental Studies I courtyard, where teams of students from Environment and Resource Studies 250, "Greening the Campus", had mounted summaries of their term projects. The students themselves -- and their friends, and interested observers -- were packed so closely around the 18 posters that it was hard to get close enough to read about composting, e-waste (scrap computer components and other hardware), and "de-icing" of the campus in winter.

Paul Kay, the long-time instructor in ERS 250, was there looking proud of his class, and commenting that successful environmental analysis of a problem, on campus or anywhere else, calls on knowledge of multiple disciplines. That was obvious in some of the projects: a "closed loop water system" proposed for the Columbia Icefield requires knowledge of hydraulics, for instance, but also an understanding of what hockey teams and their fans need by way of markings on the playing surface.

A project about the possibility of installing wind turbines on the campus wasn't so much about technical matters as about public understanding of what the devices are, and opinions on whether they'd spoil the attractiveness of the campus. (A sentence on that poster noted that students in the arts faculty had shown the least awareness of wind turbines; one student reading the poster thought that was pretty funny.)

A crowd-pleaser among the 18 posters was one headed "Life Cycle Analysis of Bomber Beer". The student group recommended that the Bombshelter pub buy more of its brew in steel kegs, which are good for as much as 50 years of reuse, and less in individual bottles. It also suggested that bar patrons be invited to bring their own glasses, just as they bring mugs to coffee shops.

One group's work dealt with "direct trails", meaning the unpaved lines across grassland where there is no official path but people want to go anyway. They recommended that a path from the Environmental Studies buildings to the nearest Laurel Creek bridge should be surfaced with something, but that another such trail, diagonally across the Davis Centre quadrangle, should be blocked off (with "a fence or a garden") because vegetation is being wrecked.

Another student group did a "life cycle analysis of a food chain", namely the ingredients of the pizza served at Brubakers in the Student Life Centre; they found that waste is very low but there could perhaps be more attention to other environmental impacts. And yet another group studied "natural gardens" outside the SLC and Needles Hall, recommending that they'd do better if somebody had the resources to maintain them, and might get less trampled if they were marked so passers-by knew they were there.

All the ERS 250 projects will be put online soon, Kay said, joining almost 300 other projects from past years.

Footnote to the morning: Environmental Studies Society volunteers were running a bake sale in the lobby just outside the display area. The cranberry-orange bread was scrumptious.

What a new prof's doing at the rink

Mair and her new interest are profiled this month in the continuing Keystone Campaign series focusing on faculty and staff members who contribute to the fund-raising effort. 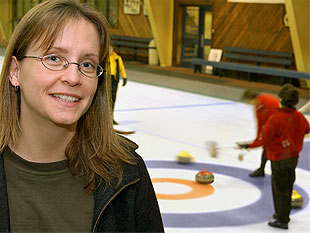 "Growing up in Blacks Harbour, New Brunswick, framed my interest in rural areas," Mair (left) says. "I've found that rural communities revolve around three buildings: the church, the school, and the curling rink. The smaller the community, the more important these spaces are. Curling clubs are struggling, membership is dwindling, and curling rinks are expensive facilities to run, but the rinks are so important to many communities."

She finds it "amazing", the article says, that such little research has been done on the impact of curling in rural Canada, and is taking learn-to-curl lessons to get a better sense of the sport and the people who play it.

What do you like best about working at UW? "Teaching. I'm enjoying getting to know more of the students. I've only been here since July 2004, so I haven't had the benefit of teaching the first- and second-year students. I also enjoy pursuing really interesting research projects and the opportunity to follow my own interests. It's an amazing opportunity to do what I love. . . .

"I'm proud to be at Waterloo, especially because of my department's great reputation in the field of leisure studies. It's nice to be part of that and to have the freedom to investigate issues that matter to me."

What motivates you personally to give to Waterloo? "Supporting students through bursaries and scholarships is important. I'm waiting for the day that post-secondary education will be free, but in the meantime, I contribute to the Keystone Campaign to help students. I'm still paying off my student loans, so I know first-hand how important financial aid can be."

A Waterloo engineering professor leads a team that has won a highly competitive national award to pursue research on remote sensing and computer vision technologies in order to better identify sea ice. David Clausi of systems design engineering has been awarded a $130,000 two-year grant as part of the Strategic Investment Initiative from the NSERC Network of Centres of Excellence called GEOIDE (Geomatics for Informed Decisions).

Clausi's project, "Classification of Operational SAR Sea Ice Imagery," was one of eight selected from an initial pool of 53 projects. "The funding will allow me to continue working on what has been referred to as the 'holy grail' of remote sensing and computer vision technologies, namely, the ability to automatically identify open water and specific ice types in radar-based satellite imagery," said Clausi, whose research interests include computer vision, digital image processing and pattern recognition.

The work of generating ice maps based on remote sensing imagery is performed manually by staff at the Canadian Ice Service, a government agency based on Ottawa. These maps are used to navigate through hazardous regions -- for example, the Gulf of St. Lawrence is recognized as one of the most hazardous shipping routes in the world -- and used to assess the impact of global warming on ice volumes. Remote sensing data is the only feasible way to collect the crucial information given the vast, inaccessible regions that need to be monitored. The remote sensing imagery is generated by Radarsat, a Canadian satellite carrying a SAR (Synthetic Aperture Radar) sensor. This sensor produces images that provide unique information compared with visible band cameras and, unlike visible band sensors, can capture imagery through most weather systems and even in darkness.

The research challenge, Clausi said, is to create algorithms that perceive the image data in the same manner as the human operator, accounting for variability of the data because of natural fluctuations in the scene and artefacts in the imaging system.

"Remote sensing images are generally quite large and require considerable time and effort to manually process and interpret," Clausi explained. "Certain map products are not feasibly produced by a human operator and computer vision algorithms are necessary to perform such tasks."