Higgins vies to be 'best lecturer'

Michael Higgins -- media personality, raconteur, scholar of religion and literature, and incidentally president of St. Jerome's University -- has been selected one of "Ontario's 30 best lecturers" by the TV Ontario program "Big Ideas".

He was nominated by former students, a news release says, for "the clarity, passion and assurance of his lectures in religious studies". 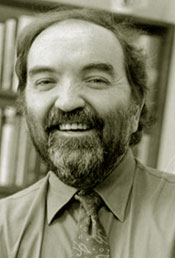 From the 359 nominations received, and on the strength of videotaped submissions solicited by the program's producers, Higgins (right) was selected to be on the shortlist of 30 professors who will vie for the provincial title. A distinguished panel of judges -- columnist Robert Fulford, playwright Andrew Moodie and Literary Review of Canada editor Bronwyn Drainie -- will narrow down the list by selecting 10 finalists.

Two finalists will broadcast a lecture on each of five successive "Big Ideas" programs beginning Saturday, October 15, at 1 p.m. Viewers will be able to vote online for lecturers who excel at "conveying their knowledge, offering their experience and sharing their wisdom" with the goal of identifying one professor as Ontario's best.

Higgins says he's surprised but deeply gratified at this recognition. "I haven't actively taught during the six years that I've been president," he says, "with the exception of being a guest lecturer in various graduate and undergraduate courses. Nevertheless, it is very satisfying to know that past students situate my efforts as a teacher amongst such distinguished company."

Higgins holds cross-appointments in English and religious studies at St. Jerome's. He is the author or co-author of a number of books exploring issues in contemporary Roman Catholicism, most recently the best-selling Power and Peril: The Catholic Church at the Crossroads (2002). This fall will see the release of Stalking the Holy: In Pursuit of Saint-Making.

"Big Ideas", which is hosted by Irshad Manji, is a two-hour program that airs Saturday and Sunday afternoons on Ontario's public broadcast network. It features a lecture format which producer Wodek Szemberg declares is "unapologetically intellectual" and "a showcase of the ideas that shape our public debates today and our understanding of the world as it is and as it is likely to be."

Michael Worswick, director of the Waterloo Centre for Automotive Research (WatCar) at the University of Waterloo, will deliver an overview on the capacity of Canadian post-secondary automotive research at a special breakfast event on August 3 coordinated by the Canadian Consulate General in Michigan. The event will take place during a week-long automotive management briefing in Traverse City, Michigan, which brings leading industry representatives together to share ideas and global strategies for expanding automotive business.

John Tennant, CEO of Canada's Technology Triangle Inc., will be among the attendees at the auto related events. "Waterloo researchers are playing a key role in the research and development that is happening in the auto sector," says Tennant. He notes that UW is actively involved in the Canadian Centre of Excellence, AUTO21 and other significant automotive initiatives that are putting the region on the map.

The Canadian Consulate General, in partnership with Industry Canada, will host the "Grand Canadian Breakfast" featuring Worswick (left) to update selected auto executives on the opportunities in Canada, especially in light of Toyota's recent expansion announcement.

"The Management Briefing Seminars attract leading executives in the automotive industry and afford CTT Inc access to key decision makers," Tennant adds. This year marks the 40th anniversary of the Management Briefing Seminars. The sessions will focus on world class manufacturing including competing in the global economy from product development to changing business dynamics.

CTT will also participate in a meeting of the Automotive Community Program, which will be held concurrently. The ACP provides economic development organizations such as CTT with access to leading-edge research, information on trends and meetings involving site selection executives. CTT received partial funding for ACP through International Trade's Community Investment Support Program, a vital program supporting the attraction of foreign direct investment to Canada.

Waterloo Region, known around the world as Canada's Technology Triangle, is a leading location for North America's automotive manufacturers and is home to production of the Toyota Matrix, Corolla and Lexus RX330. Toyota recently announced a southwestern Ontario expansion that will be coordinated from the Cambridge facility, the only Canadian location. The auto sector represents one of the economic priority sectors in the Region, which also include advanced manufacturing, business and financial services, high technology and emerging biotechnology and nanotechnology. Canada's Technology Triangle's economy is fueled by the post-secondary education sector with University of Waterloo, Wilfrid Laurier University, Conestoga College Institute of Technology and Advanced Learning and nearby University of Guelph.

Graduating this fall? Time to act

The last day to file an Intention to Graduate form is August 1, the registrar's office says, for students expecting to graduate at fall convocation on October 22.

Convocation information is available online. The registrar's office says diplomas for students who do not attend the ceremony will be sent to the "mailing" address recorded in Quest. (Graduate studies mails to the 'Home' address, or the mailing address if no home address exists.)

Month of exams and vacations

As spring term exams begin (they run from today through August 13), it's time to be looking ahead to the fall term. "Open enrolment" for undergraduate courses begins today on the Quest online system; classes begin Monday, September 12. Also on the subject of the fall term: here's a reminder that printed fee statements will no longer be sent out by mail. Students should look at Quest instead, where they can see their up-to-date account information any time, not just when a once-a-term bill arrives, and can print it off or e-mail it to somebody else if necessary. The finance section on Quest includes links to on-line banking institutions, UW financial forms, payment instructions, financial aid information, and a frequently-asked-questions page

Back to the spring term, here's one more note about exams: "unofficial grades" will start to appear on Quest August 14, with the grades becoming official on September 15.

In other matters . . . Lindy Brecht, who died July 12, was a staff member in UW's athletics department, working as a campus recreation coordinator. After a career in the aquatics program at several YMCA outlets, she came to UW in August 2002, but was actively at work only briefly before starting to battle the brain tumour that eventually led to her death. A funeral service was held in London, Ontario, on July 16. Brecht was 43.

Also mourned recently was Joseph Buskevicus, who had been a custodian in UW's plant operations from 1968 to his retirement in 1976. He died June 30, aged 94.

Among the major cultural institutions in Kitchener-Waterloo is the Canadian Clay and Glass Gallery, a short distance from campus (on Caroline Street) and with many links to UW. Among them: one of the exhibition spaces is the Dr. Douglas Wright Education Gallery, named in honour of UW's president emeritus, who still lives in Waterloo and is known as a supporter of the arts. On display in that gallery this summer is the 30th annual Juried Exhibition by the Waterloo Potters' Workshop; it continues through September 4.

Finally, here's a note about the July 19 Daily Bulletin, which included a report on the progress of UW's solar car, Midnight Sun VIII. The picture that accompanied that report -- described as showing the car "at a recent community event" -- was actually an older photo, and displayed the current car's predecessor, Midnight Sun VII. There are more up-to-date pictures on the Midnight Sun web site, including many from the car's recent south-to-north journey in the North American Solar Challenge.