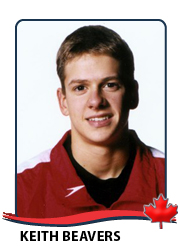 Regarded as one of Canada’s youngest bright stars, the University of Waterloo’s very own Keith Beavers will be representing Canada at the 2004 summer Olympics. The Orangeville native has qualified to compete in the 200-metre backstroke as well as the 400-metre individual medley this August in Greece.

Training with the Kitchener-Waterloo Swim Centre under the guidance of Bud McAllister, the 21-year-old kinesiology student has lightened his course load this year to concentrate on his training, taking up to four hours a day and 10 sessions a week.

Swimming since he was six years old, Beavers’s intensive training schedule has certainly earned him some noteworthy accomplishments. In 2002, he won the bronze medal and broke the Canadian record in the men’s 200-metre backstroke at the Pan-Pacific Championships. Other career highlights include earning the gold medal at the US Open, beating out double Olympic backstroke champion Lenny Krayzelburg of the United States for the gold in the 200-metre backstroke.

Beavers’s many accomplishments as well as his setbacks have helped shape him into the swimmer he is today. His swimming career took a turning point in 2002 at the Commonwealth Games when he placed eighth in the finals after qualifying in first place.

“My disappointment at the Commonwealth Games taught me more than I think winning would have,” he said. “It was a big step for me. I didn’t race properly and I learned the only way to succeed internationally was to race my own race and not worry about the others.”

On July 22 Beavers will leave for Greece, where the Canadian team will train for two weeks on an island in the Aegean Sea to prepare for the games. He will arrive in Athens on August 8; the Olympic games are scheduled to begin on August 13.

A recent release from UW's media relations office describes the work of anthropology professor Pamela Stern, who spends a good deal of her research time researching socio-cultural matters in the far north, particularly the Northwest Territories hamlet of Holman on Victoria Island, 500 kilometres north of the Arctic Circle. It is a relatively new community, dating back to the early 1960s, with about 400 Inuit people.

As an anthropologist focusing on socio-cultural matters, Stern is interested in understanding the day-to-day lives of the Inuit, including how their social systems work and how families, communities and larger institutions interact with each other.

"Holman is like most northern communities," she says. "It was established for people who had previously lived in the region, in hunting camps and seasonal villages. They were attracted to Holman by housing, by the promise of jobs and also by the promise of health services."

Understandably, the move to Holman has involved change and adjustment -- including the fact that there is simply not enough work for them all and in particular, not enough opportunity for the young people. "So there have been pressures -- of living, and of staying," she summarizes.

Stern points out that the mission of an anthropologist involves trying to look at people as they are, and recognizing that we all have our own biases, prejudices, expectations and predispositions, based on how we ourselves were raised.

She has been interested in problems that can arise in connection the culture of "sharing" among the Inuit. One of the main features of the culture has to do with being generous: sharing with people even before they ask you to do so. Sharing mostly occurs within extended families and indeed, Stern feels it is one of the ways people can maintain these relationships. She refers to it as the "glue that holds communities together."

In the past, this sharing would involve mostly meat and fish, but it could also include skins, as well as information and help with child care. (These were all the kinds of things the people of the north could provide on their own.) "Today the Inuit live in a quite different economy." Stern notes, "and it poses problems because, for instance, it is much harder to share money without measuring it."

And there are other changes. "Inuit now have self-government opportunities," she says, "and thus they are able to change policies and programs as they see fit -- and whether they do so or not, it will be their decision. My hope is that my research may contribute to a better understanding as to how some of the programs already in place might be causing them problems, so that they can then decide what they want to do about them."

Aussies is having a “garage sale” today through Thursday in the Student Life Centre. Picture frames, stuffed animals, candles, and other items are on sale at 50 to 70 percent off.

Graduate Students Association dental plan information session will be held at 3:30 p.m at the Grad House.

Today is the last chance to register for the GSA/Grad House Golf Tournament to be held Thursday at Doon Valley Golf Club. Register at the Grad House until 5 p.m. The details are here.

A reminder to grad students and instructors who registered for the TRACE workshop Freeing Your Voice: it takes place tomorrow, 1:30 to 3:30 p.m., in MC 5158.

A notice for DC 2544, 2546, 2560E, and 2567: the chilled water will be shut off to cooling units in these rooms tomorrow, 8 a.m. to noon, although the fans will continue to run. The shutoff is part of renovations for the library in the Davis Centre.