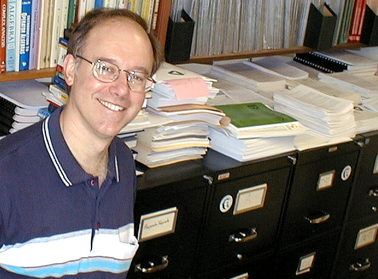 Mathematician to head Fields Institute
-- from the UW news bureau

Mathematician Kenneth Davidson (left) has been appointed director of the Fields Institute for Research in Mathematical Sciences in Toronto.

Davidson, a UW pure mathematics professor, assumed his new post on July 1. He received his undergraduate degree at UW in 1972 and his PhD from the University of California at Berkeley in 1976. He was a C.L.E. Moore instructor at the Massachusetts Institute of Technology (MIT) for two years before returning to UW in 1978.

His research interests are in operator theory and operator algebras, and he won the Israel Halperin prize in this area in 1985. He was an E.W.R. Steacie fellow, from 1988 to 1990, and a Killam research fellow, from 1995 to 1997. Davidson was elected a fellow of the Royal Society of Canada in 1992.

He has been on the editorial boards of various journals including the Canadian Mathematical Society (CMS) journals and Integral Equations and Operator Theory. He has served on the CMS in various capacities including vice-president (Ontario) from 1995 to 1997.

He sat on the Natural Sciences and Engineering Research Council (NSERC) mathematics grants selection committee in 1990-93, and served as chair. He also was a member of the NSERC strategy implementation task force in 1995 and on the mathematics steering committee from 1996-98. As well, he was on the Fields scientific advisory panel between 1991-96 and was a co-organizer of the C*-algebra year at the institute.

The Fields Institute, based at the University of Toronto, is a centre for mathematical research activity -- a place where mathematicians from Canada and abroad, from business, industry and financial institutions, can come together to carry out research and formulate problems of mutual interest.

Medical coverage under the University Health Insurance Plan (UHIP) is mandatory for anyone who has a formalized relationship with the university and is not eligible for Ontario health insurance coverage (OHIP).

Starting April 17, 2001, UHIP is also required for accompanying spouses and children, who must enrol in UHIP within 30 days of their arrival in Canada. Failure to sign up on time will result in a $500 late applicant fee, plus all retroactive fees from their date of arrival in Canada.

UW benefits coordinator Glenda Rutledge advises all paid and unpaid international workers that they are required to visit the human resources office in the General Services Complex to arrange UHIP coverage.

UHIP for international students is arranged through the registration process, but they must visit the International Student Office in Needles Hall to arrange UHIP coverage for their accompanying spouse and children.

Further information for workers is available from Rutledge at ext. 6120 or for students from Darlene Ryan at ext. 2814.

From the registrar's office: online class enrolment appointments for undergraduate students have been extended to accommodate demand. Appointments will now run from July 18 - 26. Book your appointment today on the QUEST website.

Tonight the University of Waterloo Choir will perform Music From Stage and Screen at the Theatre of the Arts. The program includes medleys from the musicals Oliver, Brigadoon, and Les Misérables as well as songs from various Disney movies, and a solo baritone performance -- Omnia Sol Temperat from Carmina Burana by veteran UW chorister Fred Chapman. Tickets are $12 for adults, $8 for seniors, students and children.