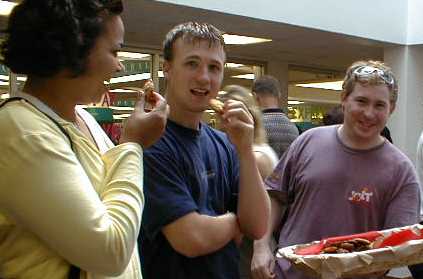 Free cookies: Andre Cousineau of the Math Society coffee-and-doughnut shop (right) handed out goodies to hundreds of visitors at Student Life 101 yesterday. Among them: Anne Chirakal and Kevin Gloyn, both of Brantford. (Photo by Barbara Elve.)

Honey, they shrank the calendar

The Graduate Studies Calendar, which last year ran to 300 pages of fine print about courses, faculty and requirements in 35 academic fields, has been reduced this year to a 70-page brochure. Most of the information from the bigger book is now available only in electronic form.

The change is partly a cost-saving measure, says Pat Rowe, dean of graduate studies, and partly a reflection of how unwieldy the calendar was becoming. A graduate student looks for two things in the calendar, she said: university-wide regulations (information about fees and policies, for example), and details about his or her own program of study. "The rest of it is just waste paper!"

And it was taking so long to get approval for the details of graduate programs, and get them into print, that the 300-page calendar would be far out of date by the time it appeared each spring. "A lot of departments," said Rowe, "put out a little mini-calendar of their own, often more up to date than ours. . . . There were often a lot of changes that didn't make it into the calendar."

An on-line calendar, on the other hand, can be brought up to date much later in the season, and maintained at lower cost. So this notice now begins the "important notices" page of the printed calendar:

It's important to keep past calendars available, Rowe said, because students expect to finish their programs under the rules that were in effect when they began.

The printed calendar, little more than a brochure, will provide the university-wide information for all graduate students. Details on academic programs will be in the electronic calendar, or in material printed by individual departments.

Some people are nervous about having an on-line calendar as the authoritative version of regulations and course listings, the dean said. "If it's not on paper, is it real?" Her answer: yes it is!

But there may be ways of improving the system, and tinkering with exactly what information still appears in the slimmed-down printed calendar that will be available to all graduate students. "The proof," she said, "will be in the using of it at registration in September."

With a total eclipse of the sun expected a few hours from now across parts of Europe and Asia, beginning in Cornwall, it's a good day to repeat a story told by physics professor Phil Eastman in the June issue of Phys 13 News, published by the physics department for high school science teachers:

"Physicists like to think that they solve problems in a logical fashion and always relate any situation to a previously solved case. Or at least they try to give that impression. The following confession will help dispel that myth. But I did finally catch on.

"The tale begins in the late sixties or early seventies, shortly after the first SIN test was loosed on the students of Ontario. I walked down my upstairs hallway at home and spied a brightly lit spot on the wall. It was perfectly circular with a sharply defined border against the dark wall. There was a closed outside door leading from the adjacent bedroom to a balcony and my conclusion was that the late afternoon sunshine was beaming through a small circular hole that my sons had either carved or shot through a panel. Using my palm to trace back the light spot, I soon found that the light was in fact streaming through the keyhole (yes, my house was built in 1920). Relief that my sons were not to blame was tempered by a new puzzle . . . why was the spot on the wall not shaped like a keyhole? I am ashamed to admit that I examined the keyhole fully expecting to find a mud-wasp nest or a paint blob blocking part of the opening to leave a circular hole. Then the penny dropped. I was in fact standing inside a pin-hole camera. The keyhole was the small aperture and the wall was the flat plate upon which the circular image of the solar disk was formed. Ain't physics wonderful!

"We now fast forward to the mid eighties. I was sitting in a church service in Guelph with my eyes cast upwards. I noticed a perfectly circular bright spot of light which would dance over the shadowed ceiling and walls, pausing for oddly irregular times and positions. I finally matched the motion of the spot with a fellow worshipper several seats over. Whenever he changed the position of his crossed arms, the light spot danced or got lost. Sunlight streaming in through a high window behind us was most surely reflecting from his wristwatch face. I felt great, but was setting myself up for a fall. After the service, I approached Les and smugly told him that without looking, I could tell him that he had a circular crystal on his watch. He was even more smug when he showed me that it was in fact rectangular. Oops! -- the same optics that governs pinhole transmission rules pinhole reflection. That nice circular spot was once again just the image of the solar orb, regardless of the shape of the small reflector.

"Well, now for the happy ending. Last fall, I came out of hibernation long enough to help teach a large first year physics course. On the December morning of the final exam we were setting things up in the huge gymnasium about 8:30. Suddenly I noticed a large bright circular disk clearly visible against the subdued background of the north west wall. I spotted the triangular section of a partly blocked high window which was serving as the pinhole. I gave an impromptu quiz to the proctors and other professors (all of them flunked) and we watched the disk progress. Fortunately the external blocking cut the show off before the students came in, or we might have given them a spur of the moment optics test."

Listings this week from the Kitchener- Waterloo Volunteer Action Centre: More information and more opportunities: the VAC can be reached at 742-8610.